PALM BEACH GARDENS, FL – I began my University of Florida career as a freshman in September 1963, driving to Broward Hall with a friend’s parents up two-lane U.S. Route 27 from South Miami. It took a long time, and I was homesick from the get-go.

When I got to school, I immediately went to The Alligator office in the basement of the old Student Union to volunteer as a reporter. Having already been editor of my high school newspaper and a teenage staff writer for The Coral Gables Times-Guide, I thought I would be a natural.

Once I met Editor David Lawrence, Jr., I did not put studying or making good grades a priority over writing a good story for the paper. My homesickness went away with each byline. All I wanted to do was be a reporter for this inspiring and demanding editor. And David must have sensed this because the assignments kept coming, day and night; and I kept reporting, day and night. I couldn’t and didn’t say “No.”

My homesickness went away with each byline.

When I think back on my early college days, I remember The Alligator most of all. I also remember sorority rush, segregated restaurants and dry cleaners I didn’t frequent and interviewing feminists Betty Friedan and Gloria Steinem when they came to Gainesville.

And I remember going to football games in the Florida Field, pre-Swamp days. In the 1960s, when my classmate Steve Spurrier was a star and the coeds wore fancy clothes — stockings and high heels — to the games, I recall the boys of old Florida used to carry flasks filled with hard liquor in their suit pockets. Alachua was a dry county. Yes, I thought getting dressed up for a football game in hot, sticky weather was really ridiculous, but it was tradition. I also thought the flask thing was dumb but try telling that to a college guy who wants to be cool and drink in his ironed, button-down ivy league shirt and tie.

Now, 54 years later, in the Fall, particularly when I watch Gators football games on television, comfortably dressed in an air-conditioned room, I relish my memories.

One always stands out from the rest. 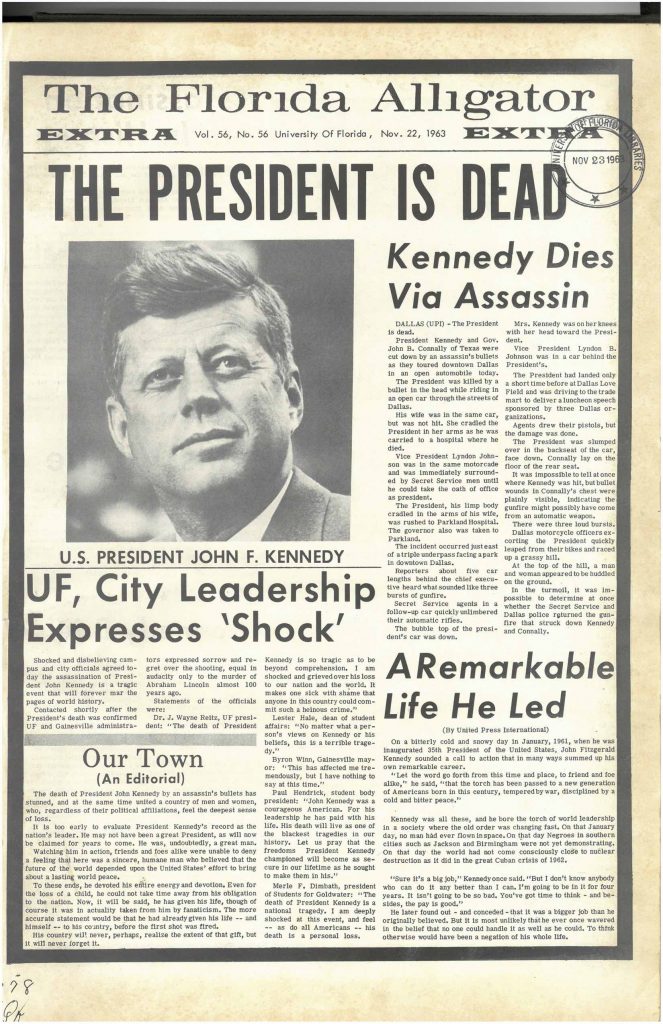 Seared, seared in my memory from the Fall of 1963 is November 22 when our President John F. Kennedy was assassinated. I remember the shock like it was yesterday. It was a late Friday afternoon and I was walking alone by the library near the Plaza of the Americas, behind Peabody Hall. At a loss and needing companionship, I raced to The Alligator, hoping that others would show up to commiserate. On a Friday afternoon, when the paper was usually closed, I didn’t know if anyone would be there.

To my surprise, Editor Lawrence, though somber, was already in full swing, giving out orders for assignments, having decided to publish an unprecedented Saturday edition. Bobbie, David’s soon-to-be wife, was sitting on the old rickety couch by his wooden desk as always. David looked at me and without a blink ordered me to go back to the library to ask a specific librarian who had already been contacted by telephone to give me a copy of President Kennedy’s bio from some research book. We’re talking pre-cell-phone, pre-fax, pre-text, pre-email and pre-computer here. We’re talking manual typewriters, carbon paper, lead pencils and rubber cement.

There was no time then to cry to anyone about this horrific and heinous national tragedy: I had an assignment for the obituary. And so, I went to work…running to the library, running back to The Alligator and working long hours with everyone else there to put out the paper.

Who told David he could do this? No one, I suppose.

I would bet David did not even ask anyone for permission to publish a Saturday newspaper. David Lawrence was The Editor; he had a job to do and he did it. Our Alligator in 1963 wasn’t just a college newspaper. This was pure journalism. Students, and professors, counted on the paper to get the news and commentary. How special for me to have been part of this heroic effort.

David (known to most people as “Dave”) went on to be an editor at The St. Petersburg Times, The Washington Post, The Palm Beach Post, managing editor of The Philadelphia Daily News, editor of The Charlotte Observer, publisher and executive editor of The Detroit Free Press and publisher of The Miami Herald at a time when the paper won five Pulitzer prizes. David’s awards are so many, including “Outstanding Journalism Graduate” from UF, the John S. Knight Gold Medal and the Florida Newspaper Hall of Fame (2010). He was president of the American Society of Newspaper Editors and the Inter-American Press Association. He has been awarded 13 honorary doctorate degrees, including from his alma mater. I invite you to find his outstanding bio on the Internet.

Our paths have crossed over the years, unexpectedly when I attended the late Florida Gov. Claude Kirk’s funeral on Palm Beach where David was key speaker, and predictably when I sought a trusted friend’s thoughtful vision and guidance.

Through the years, I always try to contact David each November 22 to say I will never forget.

David “retired” from journalism in 1999 and now, at age 75, devotes his full efforts as chair and creator of The Children’s Movement of Florida, dedicated to early childhood development and readiness. Check out his website and make a donation. He lives in Coral Gables with Bobbie, who earned a master’s degree in social work from Barry University. They have five children and seven grandchildren.

He and Bobbie are part of my UF/Alligator memory bank. And for good reason. The camaraderie of The Alligator newsroom and my editor, David Lawrence Jr., remind me that “in all kinds of weather, we all stick together…for F- L- O- R – I – D – A. Hey!”

Eunice Tall Baros is an attorney and mediator in Palm Beach Gardens, Florida, and a member of the UF Hall of Fame, 1967. She is the founder of the leadership honorary, Savant-UF, when Florida Blue Key would not admit women. She said the Board of Student Publications would not allow her to be editor of The Alligator when she applied because she had to obey a curfew for girls. Eunice is the first UF student to receive a Women’s Studies degree with a master’s in education (M.Ed.) through the College of Education, Social Foundations of Education in 1971. Eunice is a former reporter for The Miami Herald, The St. Petersburg Times, The Miami News (Food Editor, 1973-76) and The Atlanta Journal-Constitution. A former Florida Assistant Attorney General, senior counsel at Holland & Knight LLP and Assistant Public Defender, she can be reached through www.eunicebaroslaw.com or [email protected].

One thought on “Why Editors Matter: Remembering My Favorite Alligator Editor and JFK’s Assassination”