Ionly took the assignment because no one else could do it, but it led to the story that turned journalism from a just a career choice to a relentless passion.

Six years ago, Alligator university news editor Liz Behrman called me in between classes with a familiar request. Other reporters were booked, and even though I’d already filed several dailies that week, she pleaded with me to do one more. She promised to bake me something sweet in return. It was always hard to say no to Lizzie.

As any staff writer with no regard for a personal life would do, I asked for the details and scooted over to front steps of Tiger Hall, arriving just in time for the 4:30 p.m. press conference. Students, professors and UF administration officials were going to publicly urge Congress to pass the DREAM Act, legislation that would open a pathway for citizenship for children of undocumented immigrants. UF Professor Paul Ortiz read a statement from then-University President Bernie Machen. Vice president and then-City Commissioner Jeanna Mastrodicasa said more legal citizens means more taxes for the government.

At first, it seemed like a standard “we support X bill for Y reasons” sort of story. I think I had about 10 inches to fill. Photographer Max Reed snapped some pictures, I’d bang out a top, fill in the quotes and turn it in. Taco Tuesday at Tijuana Flats was in sight.

Then near the end of the conference, DREAM act supporters introduced a 19-year-old student who briefly spoke about coming to the U.S. as a young child, growing up in Miami and now facing ineligibility for most financial aid as she pursue her dream of becoming a journalist. For fear of deportation, she didn’t give her name. She had no control over how she arrived in this country. She just wanted to have the same access to higher education as her peers who had papers.

If she’s willing to tell her story, we can publish it, I thought to myself. This was a chance to present a real voice in the community, someone among us every day for whom the stakes were high, and talk about what this legislation meant to her.

But I doubted she’d be willing to open up for the newspaper. That’s a lot of exposure. How would we do it? What pictures would we use? And would she even say yes?

I had to tread lightly — just introduce myself, tell her I’m writing about the press conference, give her my card and make a gentle pitch.

“If you ever want to tell your story, I think we could tell it right,” I told her, thanking her for her time.

And so I ran over to the newsroom, whipped together the story and called it a night. Picked up some tacos on the way home.

Two days later, I got the email. It was the woman. She wanted to meet.

She didn’t sign her name, instead using “The Girl with the Headphones.”

For the first interview, we met at the Plaza of the Americas on Veterans Day. No classes to worry about on the holiday. On that breezy Thursday afternoon, we were the only two people around.

I popped an empty cassette tape into the old recorder my aunt had given me the year before, a gift meant to help with my writing career. I uncapped the red pen and put it to the steno pad. We talked for hours — about life in Gainesville, about where to go dancing and where to get good Hispanic food, about Iggy Pop and the Stooges and the Rolling Stones.

During the next two weeks, we met four times for eight hours of interviews. I rode the bus with her to school — she couldn’t drive because she feared getting pulled over. I sat in her apartment and looked at old photo albums of her with her family in Miami and Argentina. I snapped photos of her sitting at her desk in her room and riding the bus, all with her face obscured.

All along I briefed Lizzie, top editors Emily Fuggetta and Paul Runnestrand, and roommate/fellow reporter/madman/bestie C.J. Pruner on the progress of the story. I thought, for the first time, I was working on something truly important.

Only three of us, including me, knew her name, and it would stay that way. We weren’t going to name her in the story or at any point after, no matter who asked. I remember a phone call with the Alligator’s pro bono attorney, who told us if the feds wanted to know her identity, I didn’t have much protection.

One week, dozens of drafts, and many sleepless nights later, after a slew of editors and professor Mike Foley read and gave feedback on the story, after photo editors selected two of the pictures I’d taken to go with the article, after securing the entire front page of the Thursday paper, and after telling my dad I’d rather be detained by U.S. Immigration and Customs Enforcement than disclose her name (a conviction he supported wholeheartedly — thanks, Dad), the story published. 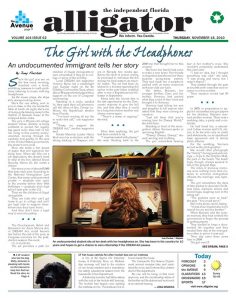 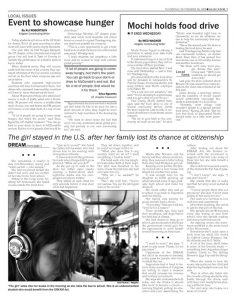 The story was so important to me because of the subject matter, first and foremost, but it was also the most significant copy I’d ever written at the Alligator. By the following spring, I was interning at the then-St. Petersburg Times (renamed Tampa Bay Times soon after). A year after that, I was starting my first job covering K-12 schools for the Gainesville Sun. Nine months after that, I got a job covering municipal government for the Miami Herald, where I still work today.

That trajectory, and the stubborn hope that keeps me in this profession — even on its worst, most frustrating days — began with the Girl with the Headphones.

The day the story ran, the girl told me she stayed home from school. Her initial nerves were calm after reading the story, but she was still anxious.

She had good reason to be. The DREAM Act failed in the Senate in December 2010. To this day, it has yet to pass. Within a year, the girl was back in Argentina — she needed financial aid to continue her education, which would have required residency papers. We’re still connected on Facebook, where we message each other every now and then.

On one of those occasions, in June 2012, I’d reached out to check in after President Barack Obama changed immigration enforcement in a way that gave DREAMers some protections. She was now studying journalism in Buenos Aires, and she’d been following the news closely.

And she remembered our conversations very well. During that first afternoon, we’d discussed journalism. I was probably a little too honest, sharing some of my insecurities about my abilities, telling her I wasn’t sure if I was capable of doing serious, important work.

While I think she was more than generous with her comment, it made me think about what we do, why we do it and how we as journalists still have tremendous power and a responsibility to illuminate the world around us.

“You pursue the type of journalism that can make a difference,” she wrote. “See, there is proof now.” 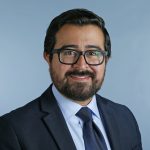 Joey Flechas covers Miami Beach for the Miami Herald. A Tampa native, former Alligator editor-in-chief and University of Florida graduate, he joined the Herald in April 2013 after a stint at The Gainesville Sun.