I never thought I would close the door on journalism and will admit that I worried a piece of me would die when I took a job in public relations last year. My work in newsrooms brought me much pride and great memories. I met many friends and even one of my bridesmaids at The Alligator. My now-husband and I first locked eyes over a desk at The Gainesville Sun. At the Ocala Star-Banner, we celebrated our engagement. And most of all, I played a small part in important stories that changed lives – and even a state law – in newsrooms.

But this one-time newspaper copy editor and designer now works at Florida’s top PR and public affairs firm in Tallahassee: Sachs Media Group. Despite my fears, my journalism skills are alive and well, and best of all, I get to work under The Alligator legend Ron Sachs every day.

The experience I gained first at The Alligator and then honed at The Sun and Star-Banner prepared me well for my new career in PR. From the newsroom to the PR firm, my desire to propel change, give a voice to the voiceless, work with words and engage my creative side has always been met. But it wasn’t always a walk in the park.

While still at UF, I left my job as copy desk chief at The Alligator for a part-time gig at The Sun and Star-Banner. I joined the combined design/copy desk there, where I edited, proofed and laid out pages. Not long after, I was brought on full time.

But newspapers were – and still are – changing to adapt to the times. Eventually, my paper and several others were sold to a growing media company (GateHouse Media) focused on building digital-first newsrooms. My role slowly changed from being one of many on-site designers and copy editors to being one of very few working with a centralized design desk in faraway Texas.

There was a lot of anxiety during the time leading up to the switch from on-site design and editing. I can’t fully describe the guilt and gut-wrenching sadness I felt watching coworkers who had spent decades in their newspaper jobs find out they would no longer have a place there after a few short months. But that sobering period also presented me with a unique opportunity for growth.

As people left, I received more and more chances to show my worth. I laid out front-pages, slotted both papers, participated in budget meetings, learned a new content management system and eventually moved into my new role working with off-site designers. The days were grueling: 10-hour shifts of pure adrenaline, rushing nonstop to meet every deadline and get two papers to press with no mistakes. The Alligator had prepared me well, though, and I loved every minute of my work.

During that time, I refined many skills I’d first learned at The Alligator: news judgement; design; editing; teamwork; leadership; productivity; resilience. The job was my life. But a newsroom romance eventually led me Tallahassee, where my then-boyfriend would cover state government for a network of South Florida newspapers. He was set, but there was no room for copy editors in Tallahassee; the job had been completely phased out long before my inquiry with the Tallahassee Democrat’s editor. I was fearful I would have to say goodbye to journalism completely.

But God had a plan for me that I never could have imagined. I landed a job at Sachs Media Group after an unexpected interview with Sachs himself.

When I first read the story of this young, brazen The Alligator editor in a community college class, I was inspired to achieve my journalism dreams. As it goes, Sachs’ reporting about an unconstitutional state law in the 1970s resulted in The Alligator leaving campus and becoming independent. At the time, I never imagined I would meet Sachs one day, much less work for him.

Now, barely a year into my PR career, I’m not only surviving, but thriving at Sachs Media Group. In person, Sachs evokes a feeling of inspiration in me even more than his story on paper ever did. His personality is grand and his generosity is even grander. Most of all, he believes in his staff and encourages us to be better every day.

Like my time working in newsrooms, I look forward to going into work every morning. My job has transitioned from helping reporters tell their stories best to helping nonprofits, corporations and individuals tell theirs. And much like a great editor, Sachs inspires his staff with his own journalistic legacy, high-stakes challenges, great expectations and a healthy dose of humor.

This journey into PR has brought new friends, new memories and new challenges of epic proportions.

But I’ll always have the memories of my time in the newsroom – whether it be the warehouse-esque The Gainesville Sun building on 13th Street, the brick walls in my hometown of Ocala or the dilapidated old frat house on University Avenue where I got my start. 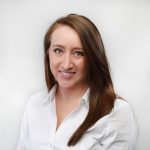 Jenna Box Sarkissian joined the Sachs Media Group team after many coffee-fueled late nights copy editing, designing and enforcing AP style at The Gainesville Sun and Ocala Star-Banner. Sarkissian’s experience also includes time on the communications team at the University of Florida Levin College of Law, where she chronicled the careers of leaders across the country for UF Law Magazine and FlaLaw Online. Sarkissian served as copy desk chief, copy editor and stringer for the Independent Florida Alligator between 2011 and 2013. When she’s not working, you can find her at the ballet studio or spending time as a newly-wed with her husband, Arek.